This is the last of three posts (to view the first post, click here – to view the second post, click here) presenting a semiotic analysis of Google Glass and the ubiquity of mobile technology (Mobiquity).  Note: these posts have been edited and reformatted from a paper I wrote for my doctoral program at George Fox Seminary with Dr. Leonard Sweet.

Google’s Use of Metaphor 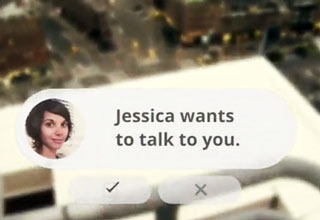 It is interesting to note that in the video, the main character, after he begins his day with a reminder of his anticipated virtual meeting that night with Jessica, journeys to buy a book in order to learn a new skill (to play the Ukulele) that he later uses to connect relationally and emotionally with her.  This is a metaphor for the video itself.  Through the video, Google Glass is portraying itself as a technology that, if learned and adopted, can help one connect with others in new and emotive ways.  Whether or not this promise is possible, it highlights the important, subtle and effective use of metaphor to communicate this reality.  As Geary argues “Though we encounter metaphor every day, we typically fail to recognize it.  Its influence is profound but takes place mostly outside our conscious awareness.  Yet once metaphor has us in its grasp, it never lets us go, and we can never forget it.”1

Google brilliantly does what the church needs to embrace.  The church needs to learn and sharpen its skills at communicating with metaphor as Jesus brilliantly did.  As Liu argues in Imagination First, the ability to employ and mix metaphors is an important part of the imagination process, allowing us to see things differently and explore the world in radically different ways.2   Google employs a metaphor to tell the story, evoking the imagination and by doing so, they open possibilities and allow the viewer to imagine what connections are possible if they adopted Google Glass mobile technology.

As the Church moves forward, it needs to re-adopt the use of metaphor in preaching and its discipleship methodologies.  Metaphors are pathways to the imagination3  and “A metaphor that rings true is more powerful than logic or a mathematical proof.”4   The re-embrace of the metaphor, particularly in preaching, would result in evoking imagination, increased reflection and application, as is the case with this viral video.

Mobiquity is upon us; we are “… now living in a world of information and communication abundance.”5   This abundance is having profound effects on us and between us.  As highlighted, the viral Google Glass video uniquely demonstrates many of the shifts we are seeing in culture as we move into a Secondary Orality.6   We are moving to a culture that increasingly embraces narrative and metaphor as ways of learning and reflection.  As a result, culture is shifting to new modes of learning and educating.  In addition, mobiquity is creating a culture that has never been simultaneously more connected and more alone.  These trends are brilliantly displayed in this viral video, highlighting so many of the cultural changes that are occurring.

As mobiquity continues to shift culture, these trends will not only continue, they will expand and evolve with increased public adoption and acceptance.  As we move into this new frontier of cultural change, the church will need to continue to change and shift its interface for interacting with culture in order to serve and speak into the changing world that God deeply loves.  Culture is constantly changing.  Consequently, the Church has the choice between two questions: Will it grievingly weep for the change the world is experiencing?  Or, will it weep over the world that is constantly changing?7   I hope the church and its leaders choose the second option and as a result, effectively love God and love others in the midst of mobiquity.

Footnotes
1  James Geary, I Is an Other: The Secret Life of Metaphor and How It Shapes the Way We See the World (New York: HarperCollins, 2011), Kindle, 104.
2  Eric Liu and Scott Noppe-Brandon, Imagination First: Unlocking the Power of Possibility (San Francisco: Jossey-Bass, 2009), Kindle, 80.
3  Ibid.
4  Leonard Sweet, Real Church in a Social Network World: From Facebook to Face-to-Face Faith. Kindle. Location 1040.
5  Peter H. Diamandis and Steven Kotler, Abundance: The Future Is Better than You Think, Location 304.
6  Walter J. Ong, Orality and Literacy: The Technologizing of the Word (London: Methuen, 1982).
7  This is based on Leonard Sweet’s challenge of whether, like Jesus at the Triumphant Entry, we are willing to weep over our Zip Codes (Postal Codes for Canadians).